The radius of a circle (r) is the distance from its centre to any point (A) on its perimeter, and is equal to half of the circle’s diameter.

Putting the point of a pair of compasses at the centre and opening the arms to the radius can draw a circle.

A random number is one whose value is governed by chance; such as, the number of dots showing when a fair die is tossed. The value of a random number cannot be predicted in advance.

A sample is called a random sample (or a simple random sample), if it is selected from a population at random. That is, all the elements of the population had an equal probability of being included in the sample.

In statistics, the range is the difference between the largest and smallest observations in a data set.

The range can be used as a measure of spread in a data set, but it is extremely sensitive to the presence of outliers and should only be used with care.

A ratio is a quotient of two numbers, magnitudes, or algebraic expressions. It is often used as a measure of the relative size of two objects; for example, the ratio of the length of a side of a square to the length of a diagonal is $$1:\sqrt[{}]2\;$$ that is, $$\frac1{\sqrt[{}]2}.$$

The rational numbers are the set of all numbers that can be expressed as fractions, that is, as quotients of two integer values. The decimal expansion of a rational number is either terminating or recurring.

A ray is the part of a line that starts at a point and continues in a particular direction to infinity. Rays are usually depicted with an arrow head, which indicates the direction in which the line continues to infinity.

Any point A on a line divides the line into two pieces called rays. The ray AP is that ray which contains the point P (and the point A) and extends toward infinity. The point A is called the vertex of the ray.

The numbers generally used in mathematics, in scientific work and in everyday life are the real numbers. They can be pictured as points on a number line, with the integers evenly spaced along the line, and a real number to the right of a real number if

Rearranging parts refers to moving counters, numbers, etc., in order to change the visual representation of the number; for example, ‘4’ could be represented as either of the two combinations below.

A rectangle is a quadrilateral in which all angles are right angles.

The point A′ is called the reflection image of A.

A regular shape has sides and angles that are equal in length and magnitude.

A revolution is the amount of turning required to rotate a ray about its endpoint until it falls back onto itself. The size of 1 revolution is 360°.

A rhombus is a quadrilateral with all sides equal.

A right angle is half a straight angle, and so is equal to 90°. 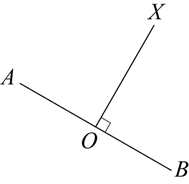 In a plane, a rotation is a transformation that turns a figure about a fixed point, called the centre of rotation.

A rotation is specified by:

A rotation is a transformation that moves each point to its rotation image.

The decimal expansion of a real number is rounded when it is approximated by a terminating decimal that has a given number of decimal digits to the right of the decimal point.